Charlie Munger and Warren Buffet once said: “95 percent of behavior is driven by incentives.” Later they amended that to, “The 95 percent was wrong. It’s more like 99 percent.”

Incentives, or “drivers,” are effective. Has your company designed incentives for project success?

Blowouts occur much like physical explosions. In cases of large projects, the energy, or friction, often comes from lump-sum contracts, which tend to breed a culture of gameplay. Some contractors choose to underbid as owners look to transfer risks. Those contractors then recover profits through claims and change orders.

In the end, no matter which way the game is played, the owners foot the bill, regardless of risk transfer provisions. 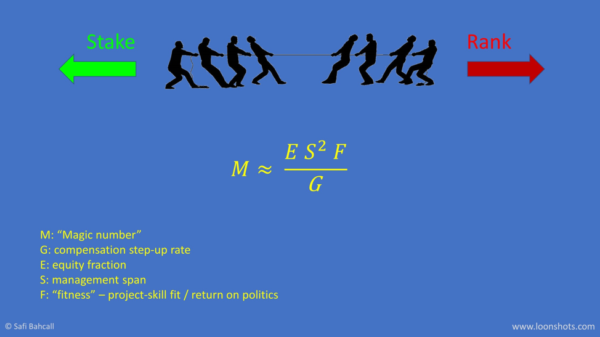 But the contractor/owner relationship isn’t the only area where misaligned incentives cause blowouts. This brings us back to the 150 rule discussed in Loonshots. Originally conceived by anthropologist Robin Dunbar in the 1990s, the theory has been studied extensively since then.

The theory is this; as size increases, stakes decrease, and perks of rank increase. If a project is managed by a group of five people (with a figurative 20% stake each), as the company grows it shifts into a layered structure of VPs, managers and mid-level employees, for simplicity’s sake let’s say totaling 100 employees. Stakes have now dropped from 20% to 1%— meanwhile, perks of rank such as better job titles, salary, and bonuses, all increase.

The tipping point is when perks of rank start to outweigh stakes in the outcome. It’s at this crucial point that individuals, motivated by their individual incentives, start focusing on politics instead of projects. For many companies, that magic number is 150, but Bahchall provides us with the formula seen above. Although from afar, the easy answer seems to be to blame culture (so much so that it’s now a buzzword), incentives are the driving force behind this culture shift.

The good news is, Bahcall’s formula consists of four key control parameters (equity fraction, fitness ratio, management span, and salary growth) that can be adjusted to raise the value of M, ensuring that incentives remain aligned, and innovation continues.

IPD (integrated project delivery) integrates engineers, contractors, and owners into a single contract between all three parties, thereby aligning incentives. Although many industries such as healthcare and financial services have had much success with IPDs, this isn’t always a feasible solution for large-scale projects which are often constrained by public procurement regulations, corporate governance, or the banks that hold the purse strings.

And, life isn’t black and white. The best solutions are often found in the middle. Improving the contractor/ owner dynamic may be as simple as increasing collaboration. Collaborative contracting also referred to as relational contracting, might be the answer.

From Harvard Business Review, “Designed from the outset to foster trust and collaboration, this [collaborative] legally enforceable contract is especially useful for highly complex relationships in which it is impossible to predict every what-if scenario. These include complicated outsourcing and purchasing arrangements, strategic alliances, joint ventures, franchises, public-private partnerships, major construction projects, and collective bargaining agreements.”

Mckinsey has this to say on relational contracting,  “There is clear evidence that better program and budget outcomes can be achieved by pooling delivery risk and sharing profits among the owner, engineer, and constructor. Crucially, by procuring in this way financial returns for the engineer and EPC firm can be increased.”

Although improved collaboration between contractors and owners may give rise to opportunities to improve delivery times, costs, safety, and quality throughout the project life cycle, it is essential to watch for misalignment. Not all alignment is productive, progressive, or successful to a project’s bottom line. It’s imperative that all parties, including direct employees, contractors, and owners, respect the role each plays and join in a united, concerted effort to meet project objectives. And remember, despite a concerted effort towards productive alignment and communication, individualized incentives motivate individual stakeholders “99 percent” of the time.